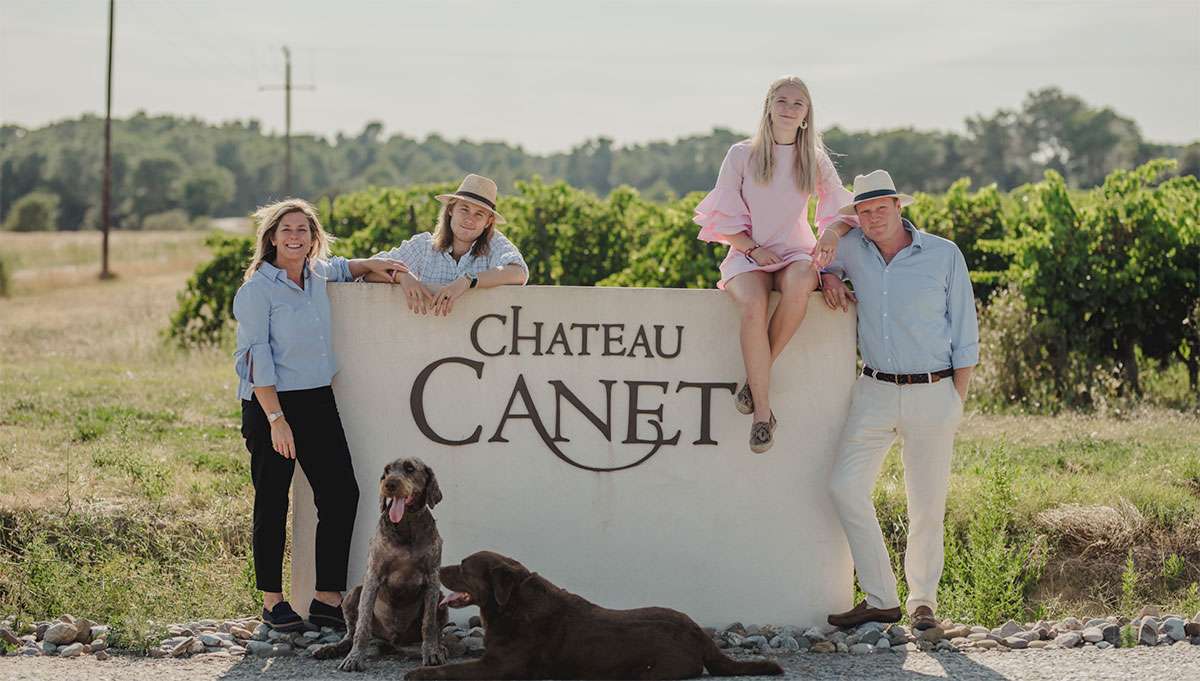 I first went to visit Château Canet in January this year to discuss wine events with owner Victoria Lemstra-Bake, I then returned the following month to taste the wines and meet with her husband and winemaker, Floris Lemstra. Château Canet is a wine estate in the Minervois village of Rustiques, just north of Trebes. Of the 120 hectares of land, 48ha are planted with vines producing both AOP and IGP wines, with a further 3ha of olive groves and the remainder planted with a combination of forest and farmland. It is also home to nine holiday cottages, sleeping up to 40, and a conference centre.

There has been a wine estate at Canet since the 12th century, however, Floris and Victoria bought the Domaine from Gabriel Meffre (producer of the Fat Bastard wines) back in 2007. Floris is originally from Holland and Victoria is a Dutch/New-Zealander, however, they were both installed in Burgundy for 20 years before coming south to the Languedoc. Floris was the export manager for JC Boisset and Victoria worked for the luxury travel company Butterfield and Robinson. Today Floris runs the wine side; both production and export, whilst Victoria, with assistant Marlin, runs the tourism side of the business. It is a busy venture and very interesting to visit, I could have happily followed Floris around for the day discussing his winemaking techniques and views on organic versus Terra Vitis® viticulture! As it was I spent a full morning there and enjoyed a cellar tasting which then continued on in their tasting room with a smorgasbord tapas lunch to partner the wines! Très conviviale!

Floris works under the Terra Vitis® label*, he believes that it is preferable to farming organically due to the issues of using copper and sulphur in the vineyards with organic viticulture. They have introduced sexual confusion ( a practice that aims to protect the vineyards from insects without the need to spray insecticides, it is particularly used against the grape moth here) and work according to a method that is protective of nature with minimal chemical intervention. The idea is for complete traceability, respect for nature and a minimal environmental impact. They have their own beehives alongside the vines, olive groves and farmland.

Unusually for the Minervois they produce a lot of white wine, around 30% of their production. They have also added to the estate recently and bought vines within the Limoux AOP in Digne d’Aval, and are now making a delicious Blanquette de Limoux. Most of the vines are machine harvested which allows them to get the grapes into the winery quickly, it also means that they are able to harvest during the evenings when the temperature is cooler and so there is less risk of the grape skins bursting and creating oxidative flavours in the wine. On arrival at the winery, the grapes are sorted, de-stemmed and injected with nitrogen gas, which replaces the need for sulphites. Floris has invested in his own nitrogen producing machine seeing the long-term benefits of this system. By using nitrogen at this point he has found that he uses less than half the amount of sulphites traditionally used **. The wines all undergo a cold maceration which allows the flavours to intensify, creating fruity and structured wines.

The winery is comprised of a combination of the old and the new; stainless steel and concrete tanks, oak barrels and egg-shaped plastic tanks. This is a marriage of modern wine making technology and letting nature take its course. Floris also uses a system called ‘bio-protection’, which allows him to use less additives, (such as added sulphur), and produces wines with a more pronounced aromatic profile. Floris explained that he was very open and interested in new ideas and technologies, he was also experimenting with a wine grenade from New Zealand that creates a form of extreme micro-oxygenation, a nano-oxygenation that makes the wines more expressive. Fascinating stuff!

They have a selection of wines under AOP and IGP labels, I tasted tank and barrel samples and a selection of bottled wines. Here are some of my notes:

They also make a Minervois Rosé and Red, I did not get a chance to try these at this point.

** The addition of sulphites, and nitrogen, at this point is to prevent bacterial inhabitation and avoid off, or oxidative flavours spoiling the wine. Note that there is no such thing as a ‘sulphur-free’ wine, only a wine with no added sulphur.

9h to 17h Monday to Friday
or by appointment